The garden fence at The Quilted Skein in La Grange, Texas. 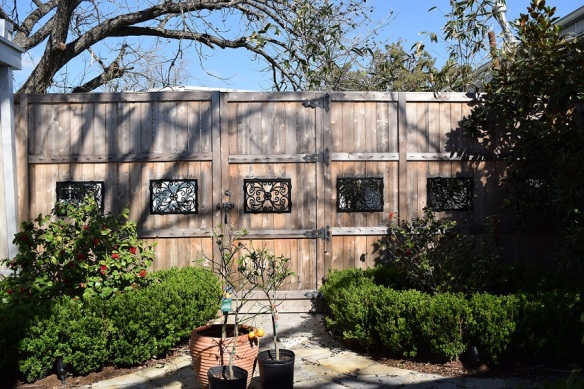 Every time I go into The Quilted Skein in La Grange, Texas, I see beautiful samples like this shawl. I get inspired to knit but somehow when I return home, I find I already have a long to-do list and knitting never makes it to the top. Sometimes even the top items on my to-do list don’t get any attention. 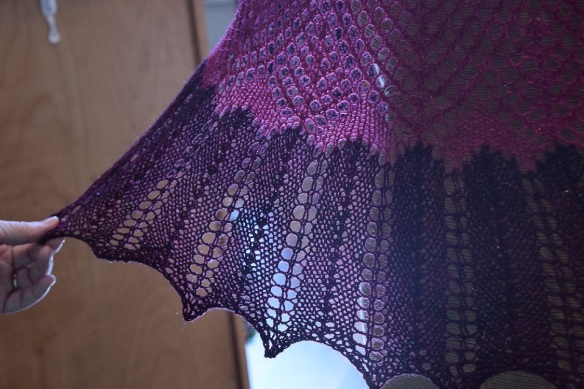 Resting in the shade

Wall of yarn at The Quilted Skein, La Grange, Texas

Wall of fabric at The Quilted Skein, La Grange, Texas

The wall supporting a Texas overpass

I visited the Texas Quilt Museum recently in La Grange, Texas. A while back I missed their exhibit of butterfly quilts and now I make an effort to go to each exhibit. (They change their exhibits once a quarter.) On one side of the museum is a beautiful garden, Grandmother’s Flower Garden (photos to come in a separate post) and on the other side is The Quilted Skein, a wonderful quilt fabric and yarn shop.

I met Barbara Taylor of Bastrop in The Quilted Skein, as she brought in her in-progress socks for show-and-tell. Look at those fabulous stripes! She said the yarn was dyed that way, and the stripes appeared as she knitted. Those are going to be some lucky feet that get those socks! She was nice enough to let me photograph her work. I told her I was going to post it to my blog and that she would be “almost famous.”

A peek into the top

My knitting skills are limited to scarves: I cast on 13 stitches, knit until I think the scarf is long enough and bind off. Usually I bind off a different number of stitches that I started with, sometimes 11, 12, or 14. I mentioned this to the women at The Quilted Skein and they said they have some beginner knitting classes coming up. Hmmm, maybe I can learn to count and knit?

And now, a confession. La Grange: I’ve always heard (and pronounced) “Grange” with a long a (ā). One day I was roaming around my French dictionary and found “la grange,” as in “the barn.” Even though I studied French (a long time ago), it still never occurred to me that La Grange was anything other than “lagrānge,” the name of a Texas city. It’s good to learn something new every day, but a little surprising to learn something now that I should have learned a long time ago.