I traveled to Santa Fe in July to take a thread painting class from Jennifer Day. There were seven students from six states: New Mexico (2 students), Washington State (1), Illinois (1), Arizona (1), Utah (1), Texas (me!). Our mascot was B Bear, Jennifer’s dog. 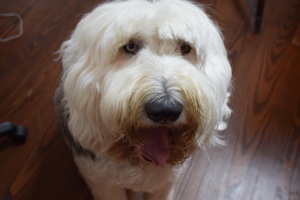 The first day in class we all worked on the same project (B Bear) to familiarize ourselves with the free-motion quilting needed for a thread portrait. We chose our threads and off we went to the sewing machines. The quilt “sandwich” was layered (top-to-bottom) with B Bear’s photo (printed on special printer paper/fabric that can go through an inkjet printer), canvas, batting, and backing fabric. The canvas is there as a stabilizer. This type of art uses thread as its painting medium and it is usually heavily stitched. A stabilizer is needed to prevent puckering. Nothing worse than a puckered thread painting, right?

Jennifer has worked with 18-ounce canvas (too heavy), 10-ounce (too light) and settled on 15-ounce (just right). She provided a list online resources as a class handouts, but also mentioned that the Santa Fe art supply store, Artisan, carried it on a roll. Thursday afternoon Mary Anne, Jan A., and I decide to check it out. 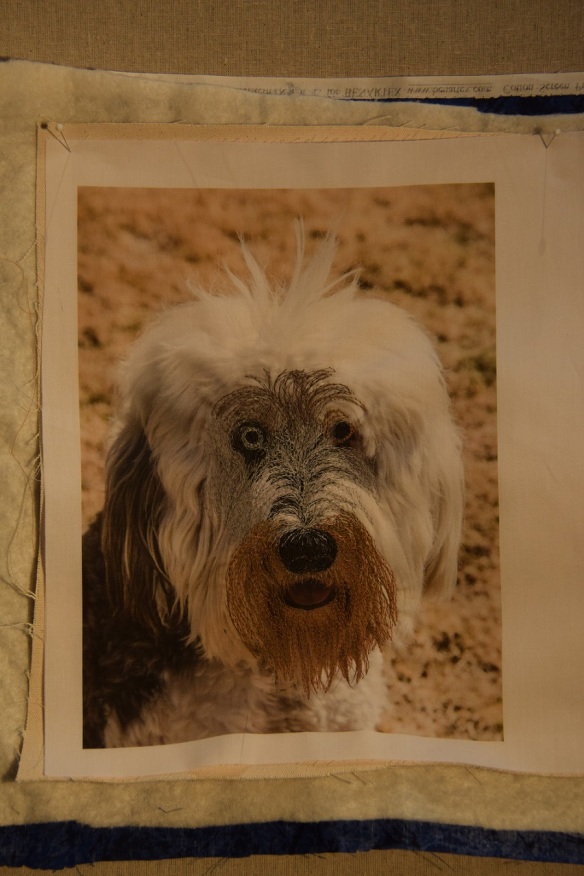 Artisan did, indeed, carry canvas on a roll in a couple of widths and couple of weights, but no 15-ounce. They had 14-ounce canvas, which we thought would be okay. However, the customer immediately before us bought the last of the roll of the 60-inch, 14-ounce canvas, but they still had the 84-inch roll.

Mary Anne, Jan A., and I decided we would wait until we returned home to buy canvas. That way we wouldn’t have to worry about folding it up and creasing it on our trip home. And, we figured, we all live near a big city so we should be able to find it at our own local art supply stores, right?

That was optimistic on my part, it turns out.

Once back in central Texas, I let my fingers do the walking through the Internet listings for art stores in Austin and called four, plus one fabric store with home decoration fabrics. Does anyone have 15-ounce canvas on the roll? No. Do they have any canvas on a roll? Only one and it has 12-ounce canvas. Hmm. Not sure about that, as it’s between being “too light” and “just right.” 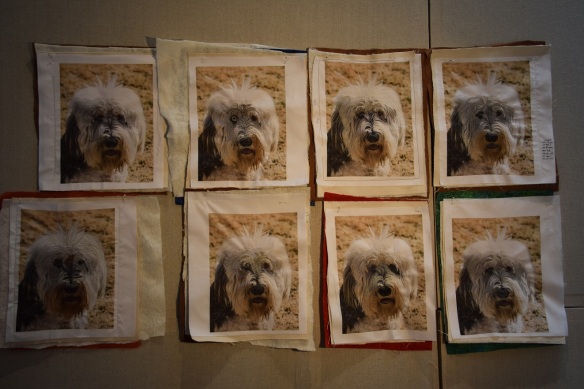 What’s up with that? Santa Fe, New Mexico, has about 70,000 people (according to Wikipedia). Austin proper has over 900,000 residents and the Austin metro area is well over one million. The University of Texas at Austin has a student population that hovers around 50,000. UT has an art school. There are several other universities and colleges in town. We have the Laguna Gloria art school. We have the Texas legislature. Don’t they need canvas for something?

This site uses Akismet to reduce spam. Learn how your comment data is processed.